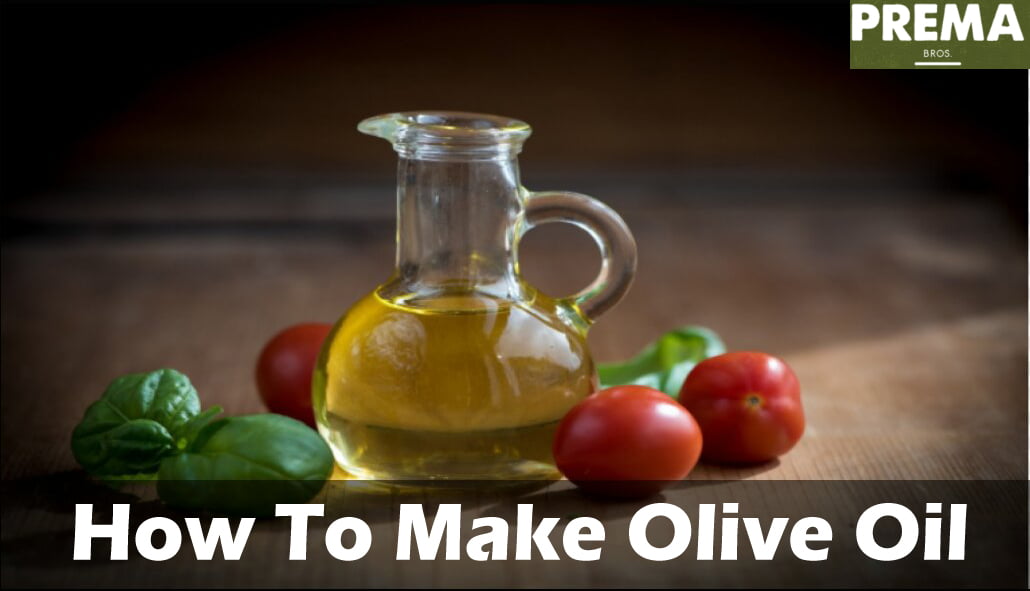 If you want to know the stages, the methods, and the procedure to make the olive oil, you are in the right place. It is rich in active ingredients and antioxidants, the health benefits olive oil are numerous.

The calories 2 tbsp. olive oil are about 238 calories and 28 grams of fat Its organoleptic properties, as well as the smell and taste, make it the best vegetable fat in the world.

The olive oil is extracted from the fruits of the olive tree and is a typical Mediterranean food. It is a valuable and ancient product with a high economic value. Today in this article, you will learn how to make olive oil.

How To Make Olive Oil: The 7 Stages of Production

The production chain is divided into seven phases:

Let’s now analyze each one in detail:

The olives are separated from the twigs and leaves. Some producers leave a few leaves to give the oil a fruitier flavor. The olives, in the crates, are brought to the mill and are weighed there.

Storage is essential for extracting more flavored oil. The olives must remain in a cool and ventilated place, placed one on top of the other in thin layers, and, above all, must not be stored for more than 24 hours. Without air and for periods longer than 24 hours, the olives could easily rot.

The olives are rinsed in large tanks with constantly fresh and exchanged water. Then they are dried, leaving them to drip.

The olives that come from the washing arrive in the milling rooms, sliding on special belt elevators that take them from the washing machine and drop them in the crushers to start the extraction of the oil.

The first phase of oil extraction is the milling (it is also called crushing). Milling in ancient times consisted of a stone mill that was rotated by the work of a donkey or a horse. Now the grinders are mechanical, but the principle is the same: the crushing.

As the name implies, it is carried out by a hammer crusher that is cylindrical machines that welcome the olives and crush them due to steel hammers that rotate quickly and hit them.

The oil is extracted not because the olives are crushed by the mill but also because the pieces of the broken core, rub the olive pulp, reduce it to a paste and let the oil run. The unloading of the crushed olives takes place downwards, always mechanically, pouring the oil paste into the kneading machines.

In the kneading phase, there is the separation between the water molecules and those of the oil that make up the olive paste obtained by milling. This is made possible by the continuous mixing of the olive paste made by special helical blades that rotate slowly, at 20-30 revolutions per minute.

6.The extraction of the olive oil

Extraction is the process that finally sees the appearance of a product close to what we know. The extraction is the phase in which the oil is separated from the pomace, which is from the waste of the milling (fragments of kernels, peels, etc.).

In this case, there are different techniques to bring this stage of olive oil production to completion; let’s see them briefly:

Pressure extraction: It is the traditional method. The oil paste is pressed with a hydraulic press. Due to the pressure, the oil must separate from the solid part and flows, depositing itself on a collection plate. After the extraction of the oil, the parts that make up the press are disassembled to allow the removal of the pomace.

Centrifugation extraction:  the oil paste (pomace) is centrifuged in a rotating conical drum (called decanter). Centrifugation is carried out at a rotation speed of approximately 3,000 – 3,500 rpm. Due to the different specific weight of the two elements, pomace and oil, centrifugation separates the oil from the pomace.

The extraction with the Sinolea: It is an extraction that is based on the physical principle that there is a difference between the “surface tension” of the water and that of the oil.

Remember, the oil and water are not soluble: it means that one does not dissolve in the other, as happens, for example, between water, salt, water, and sugar.

So in practice, the result of the different surface tension is that oil tends to stick more easily to a metal surface than to water. Thus, it is sufficient to let the water run to obtain only pure oil, which can then be detached from the metal blades of the machine to which it has remained attached, called sinolea.

7. Decanting:  It is the traditional method, based on the non-mixing of oil with water. The oil in the resting phase is lighter than water, separating from the water that contains it and is thus collected.

However, decanting is an abandoned method because it does not allow obtaining good quality oil. In some European countries, it has not been used since the fifties of the last century that is, since the electric current arrived in the countryside and allowed to use more modern systems.

Once the extraction phase is over, the oil is ready to be bottled. It is stored in steel containers, in contact with a nitrogen atmosphere, organoleptic qualities (i.e., flavor, smell, consistency, color, etc.).

Then the oil is bottled and hermetically sealed, avoiding the alteration of its organoleptic properties. The containers must be made of dark glass to avoid contact with light, or alternatively, you can use special containers in tinplate, previously treated with antioxidant materials.

Another important factor during the bottling phase is the overall time of the operation. In fact, it must be short of safeguarding the taste and flavor of the oil. After completing these seven stages of oil production, you can finally enjoy an excellent fresh olive Oil. If this process is exhausting for you, why not buy olive oil online like Premabros.